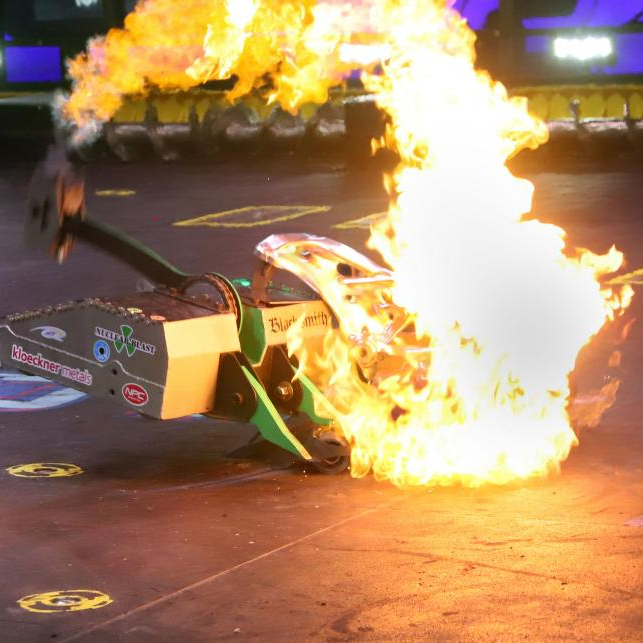 Robot Combat is an emerging, tech-driven sport in which builders control robots equipped with innovative weapons and ingenious defenses. Builders arm their bots with everything from flamethrowers to spinning saw blades, guaranteeing a spectacle and an entertaining experience for everyone. Bots go head-to-head in an enclosed cage with the goal of knocking each other out of commission. Robots are given three minutes in each round, during which either one of the robots "taps out", is knocked out, or the clock runs out and it goes to a judges' decision. Builders repair their robots between each match until they're eliminated, or crowned the champion.

Pitt RAS will build and design a battle bot for the NHRL competition and potentially for a few local competitions in Pittsburgh. Team members will use a new online platform called Onshape for designing the bot. The students will get a chance to fabricate, assemble, and battle with the robot. If you're interested in joining the project, the two pre-requisites would be to watch the NHRL video below to get a sense for the competition and to review safety regulations and rules which can be found here.

This is a fun, enjoyable project and gives the teammates an opportunity to travel and learn more about robotics. Building a robot of this scope and scale requires a lot of creativity, team work, communication and clever engineering. With a great team, strong communication, and collaboration, we are confident we can build a cohesive robot that can really wreak havoc in arena. .

Our design will follow the Combat Robotics Handbook by Repeat Robotics. The team is split up into multiple subteams to tackle different systems within the robot – power and electronics, drivetrain, weapon design, and frame assembly.

Because of the nature of this project, hardware both on mechanical and electrical side, and software will be required to make an effective robot.

The project will involve a whole variety of people. We are going to need a group of people designing it, a group of people physically making it, a group of people working on the drive system, and another group working on the weapon assembly, and more. We are also gonna need someone who will complete some artistic work such as designing cool shirts to wear to the competition and a logo for the bot. The biggest requirement for joining the team is having a big passion for robotics and the desire to build the best battle bot. See our contact page for how to reach us.